Guilty Pleasures come in all forms…
As I sit at my work computer, typing away at past due emails, sipping from, and completely hyped up on, my (forbidden) Chai tea, I stop and think, this is one of my guilty pleasures. I have a true weakness for steaming hot, super frothy, soy Chai teas from Pete’s Coffee & Tea. The warmth and creaminess get me every time. And I have to mention the crazy caffeine buzz I get from one of these. I do not regularly drink soy milk or caffeinated drinks. And this is taken from someone who used to eat everything soy- soy ice cream, soy “meats,” soy milk, soy, soy, soy, and drink A LOT of coffee. So, yes, this once-in-a-while drink is my guilty pleasure.

And I have to mention, I feel WAY better not including the above in my diet/life now. No comparison at all. And you’ve gotta love the media for making everyone think that soy is the healthy wonder food that it is not. Ah, ignorance (in my case).

Back to guilty pleasures though.

What makes something a guilty pleasure anyway? The Merriam-Webster’s Online Dictionary thinks that it is “something pleasurable that induces a usually minor feeling of guilt.” I agree, but I believe it is more than that.

I know that the term guilty pleasure is just a term and does not have to be taken literally, but it’s still odd if you think about it. Guilt means a sense or awareness of doing wrong; when a person realizes or believes—accurately or not—that they have violated a moral standard (source). Pleasure means a sensation of gratification, happiness, enjoyment. Someone who is on a strict diet might express a guilty pleasure of eating a big cookie; pleasure in eating the cookie but guilt because they have not stuck to their diet. What contradicting feelings these actions and thought can bring about.

When I searched for guilty pleasures I found this statement in a forum. I believe this is well put.

“Unfortunately, in today’s hectic world this expression has begun to take on a new dimension in that many people now consider taking time out for themselves or spoiling themselves a little as a “guilty pleasure” when, in fact, this kind of activity actually constitutes a highly sensible approach to combating the stresses and strains of modern life by taking care of one’s physical and emotional health.” (source)

Some other guilty pleasures that I am quite fond of feeling “guilty” for include:

Raw honey and raw almond butter (or Tahini) eaten with a spoon, from the jar.
Pure2Raw foods. Found and bought here and seen here. Especially… 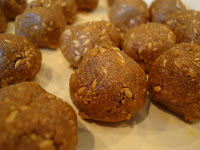 A HARD exercise session
And red wine
Guilty or not, I love these things. I’d rather live life with pleasure than feeling guilty.
Been there, done that.
Moved on.
What are your Guilty Pleasures?
Follow and like: