Today is day one. Day one of April that is.

Can you tell I was running out of Fools and Truths? What do you think? Which are fools and which are truths? I’m making this a contest.
The person who gets all of the guesses correct wins something fun!!! Leave a comment with the number and whether you think it’s a fool or a truth. Winners will be announced Saturday morning (3/3), along with the correct answers!

Anyway, today is also day one of juicing! (gave you a free one with the fools or truths…)
The Juice Club, started by Terces Engelhart, of Cafe Gratitude, Seven Day Juice Fast takes place the first week of every month. Today, again, is day one.

No picture but SO GOOD. Breakfast of champions!

Blended and divided into two (now) empty almond butter jars. One for breakfast, one for snack.

Not the actual smoothie I’m drinking but close enough. 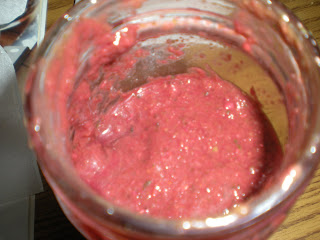 And that’s as far as I’ve gotten with my planned meals so far. I also have a red pear and Kombucha waiting for me. I’m not doing the whole week of the Juice Club’s week juicings but I’m going to try for a couple of days to see how I feel. So far, so good.

But, last night, I was not liquefying my life so I had myself a Kabocha Bowl. 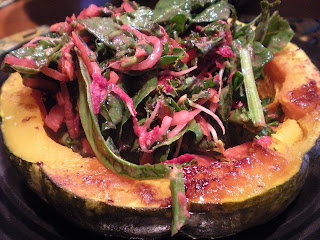 It was good. Really good. To make your own Kabocha Bowl at home, simply cut a Kabocha squash in half, scoop out insides, and bake both sides cut side down (350 degrees until tender). 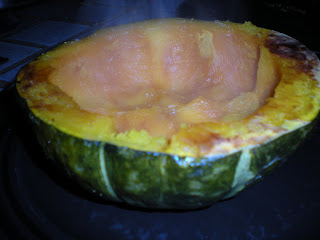 When fresh out of the oven (as above), assemble a salad. Then fill the “bowl” with large amounts of the salad. 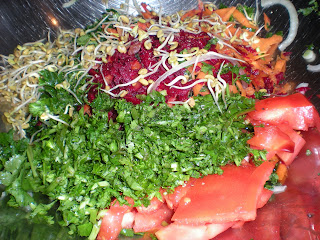 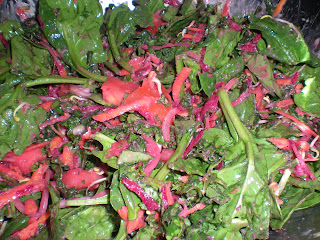 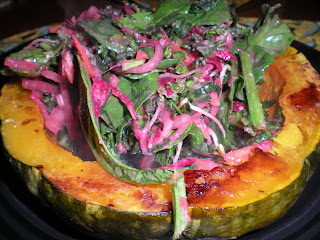 Don’t forget to take your guess at the Fools or Truths above! The person who gets all of the guesses correct wins something fun!!! Leave a comment with the number and whether you think it’s a fool or a truth. Winners will be announced Saturday morning, along with the correct answers!

One more thing, if you missed yesterday’s Guest Post by the amazing Katie, go read it! It’s got laughs and recipes. Nothing could be better.