My morning in a nutshell:

Slept in until 6:15 am (as I do on Tuesday/Thursdays). As I went through the motions of putting running clothes on, blending my green smoothie for later, and grabbing some early morning, pre-run grub, I contemplated crawling back into bed. This feeling of getting just a little extra sleep was greater than usual, but Tuesdays are my weekday-run days and the road was calling. I left the house just a bit later than usual, about 10 minutes later… this was either a very good and fortunate thing or a very, very bad thing…

At approximately 6:50 am the traffic on Highway 17 Northbound came to a complete stop. This is not entirely unusual for Highway 17. This highway is pretty much the only (very windy mountain) highway that connects the surrounding cities, and the only highway I can take to get into town (as I live South, in the Santa Cruz Mountains).

Traffic is stopped. I’m sitting in my car having no idea what is going on but knowing that I just want to go running. At some point around 7:30 am, everyone on the road had to move their cars to the side to make way for a firetruck. Around this time, one of the cars near mine had died, and had to have the battery jump. For this reason, I made sure I turned off my car, so the same thing didn’t happen to me. That would be no fun.

8:15 am, still not moving. I now know that about 5 cars up from me, a giant big-rig had overturned, blocking both Northbound lanes and one Southbound lane. Not good. Thankfully, there were no injuries, but what if I had been on time this morning?

The battery is dead. Oh, yes, that could be because I left the f***ing lights on. Are you kidding me?! This is NOT the highway you want your car stalled on. As I stuck my head out the car window looking quite frantic, one car stopped and asked if I needed help. Yes! And then asked if I had a cell phone to call for help… Um, really? Yes I have a cell phone but who am I going to call? I’ll be sitting here for another hour blocking even more traffic.

Finally, a man in a truck pulled over to help me. Thank you man in the green truck! And wouldn’t you know, his jumper cables wouldn’t reach- our batteries were on opposite sides of our cars. Lovely. Just when I thought all hope was lost (I can definitely do dramatic), a little jeep pulled up, did some fancy manuver in his little car, and jumped my car’s battery, saving the day.

Yay! I can finally drive off and… a police officer stops the car in front of me.

Ok, so I finally made it to the gym by 8:40 am to shower and head to work. I can honestly say, I have never been happier to be at work. Good story? All that and this is all we get: Mercury News Report

All this talk of mishaps, waiting, and dying cars, makes me want banana bread (I am fortunate to have a healthy appetite).

In The Name of Health Banana Bread

This recipe is adapted from Munchies, Muscles, and Mischief, found here. Visit her site for other yummy foods and straight up ‘Mischief’ as she will crack you up with her honesty and craziness. Oh, and she rocks the weights world!

1) In a small bowl, pour the milk over the dates and microwave for 15 seconds. Set aside to let soak.

2) Preheat the oven to 350. Lightly grease and flour a baking pan.

3) Beat the egg, egg white, vanilla, honey and applesauce until well-combined. Beat in the banana thoroughly, and then stir in the soaked dates. Set aside.

4) Combine the flour, baking soda, baking powder, and salt in a separate bowl. Stir in the wet mixture just until moistened. Fold in the walnuts, if using.

5) Bake for 35-45 minutes, or until the edges are golden and a toothpick inserted in the center of the bread comes out clean.

6) Let cool in the pan for 15 minutes before transferring to a wire rack to cool completely. Slice with a wet knife, and store in an airtight container in the fridge. 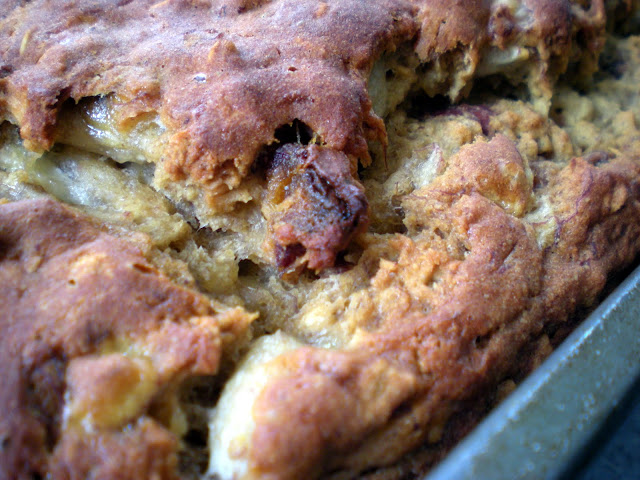 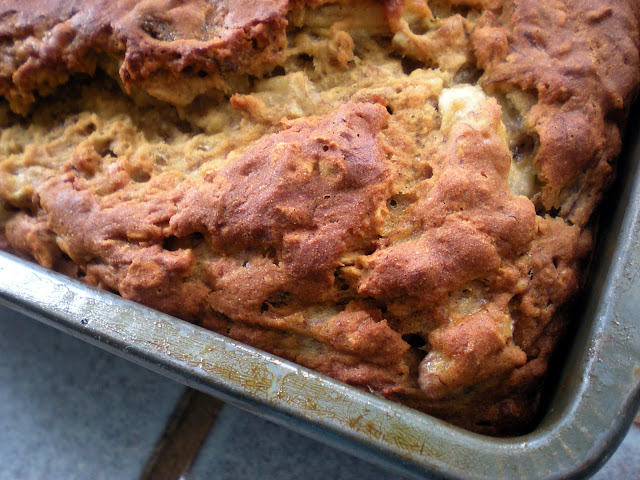 It’s actually fantastic as breakfast, a snack, or pre-workout bites. 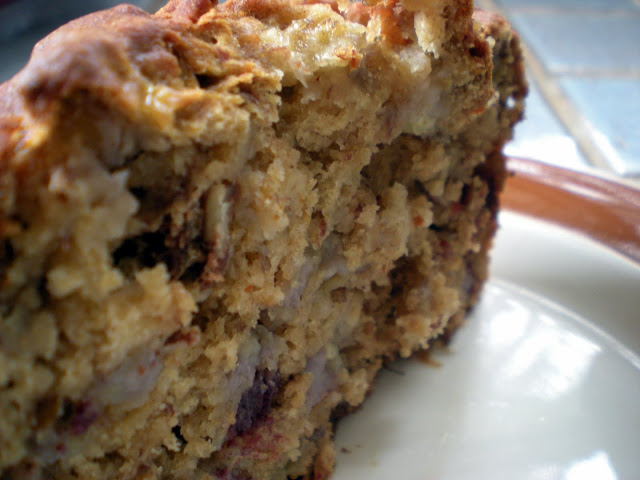 It’s fantastic any time of day, actually. And it’s In The Name of Health Banana Bread, so eat up! And in fair warning, this bread will not last long. 😉 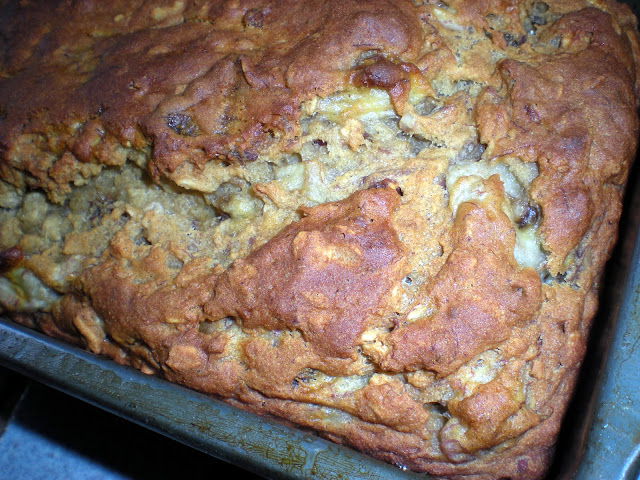