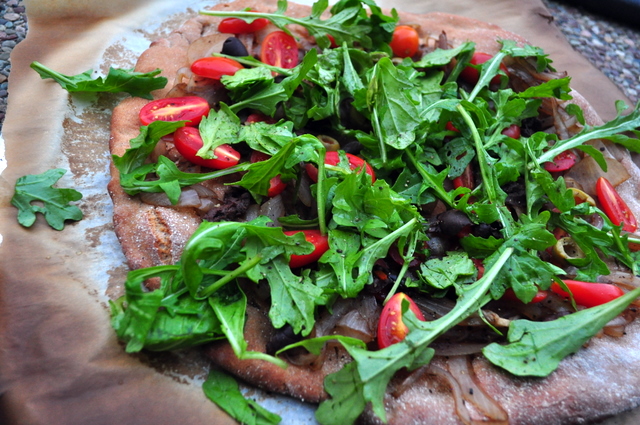 Can you tell I’ve been eating a lot of vegan dishes lately? I have. But not because I want to be vegan…

There is nothing wrong with being vegan, I’d just rather be a Lori that eats vegan meals, vegetarian meals, Paleo meals, and has fun with food.

Eating a certain type of way does not define a person, or at least shouldn’t. Who cares if someone doesn’t eat gluten? Who cares if they don’t eat grains? It’s not who they are, it’s what they eat.

There are many times I have considered myself a label in the diet-world. I was raw-vegan for a while. Then I was Paleo. Each time I placed a certain emphasis on who I was based on what I ate. 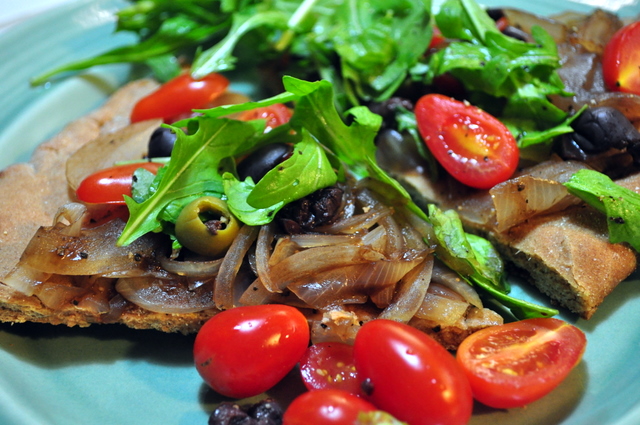 With that label, a huge ladder was erected and I was to stay at the top of that ladder as high up and for as long as possible.

What I mean is that placing a label can sometimes do more harm than good. Sometimes. For my personal experience, when “I’m Paleo” I feel pressure to only eat Paleo, being loyal to other Paleo eaters, almost not conversing with the non-Paleo followers. Maybe it’s just my weird, twisted mind placing all these unspoken rules. Or maybe there are others out there who feel the same way.

I have definitely tried out many ways of eating, each have been awesome learning experiences to figure out what may work, what may not. But I always find that after a few months I’m down in energy again, feeling a bit unbalanced, and pressure to stay with that label. 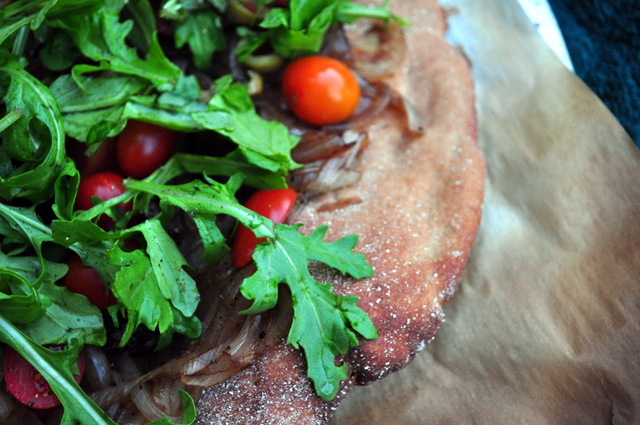 If you’re in the same boat, struggling to figure out which “label” you might fit into, how about try taking away the noun.

Replace that noun with an adjective. Take away the phrase, I am vegan, and replace it with, I eat vegan meals. Works in my head and leaves all the labels and stigma and rules out of eating.

Alright, now that I’m done preaching (probably to the choir), I’ve got a recipe to share.

If you’re avoiding dairy products and today your wanting to try a fun, new vegan recipe and meal, here’s a pizza you’ll have to try. 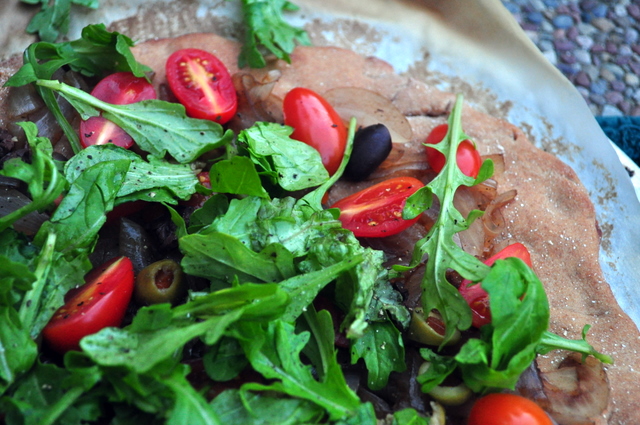 Makes one 10 to 11 inch pizza, 4-6 servings. Adapted from The Get Healthy, Go Vegan cookbook.

For the pizza crust:

In a large bowl, dissolve honey or agave and yeast packet in 3/4 cup warm water. Let stand for 5 minutes.

Add flours, sea salt, and olive oil to the yeast mixture and stir until a dough starts to form. Turn dough out onto a lightly floured surface, kneading dough until smooth and elastic (adding more flour as needed for preventing sticking to surface).

Lightly grease a large bowl with cooking spray or more olive oil, and place dough into the bowl. Over with a towel and let rise until dough has doubled in size, about 30-40 minutes.

Preheat oven to 500 degrees. After dough has risen, punch down dough and place back onto a floured surface. Roll out dough into a 10 to 11 inch circle. Place on parchment paper, sprinkle with cornmeal, and bake in oven for 5-7 minutes.

In a large skillet, bring 1/4 cup water to a simmer over medium heat. Add onions and cook until softened and water has evaporated (about 5 minutes). Add the balsamic vinegar, honey, pepper, and sea salt, stirring to combine thoroughly.

When crust is cooked, out of the oven, coat with a thin layer of sauce of choice. I went with pesto. Add onions, and olives, and place back in the 500 degree oven for 3-4 minutes.

Remove from oven and top with halved tomatoes, arugula, and more balsamic vinegar (and oil), if desired. 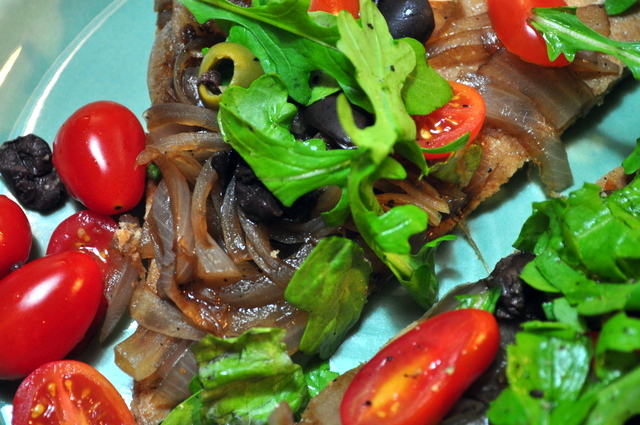 So, that’s my pizza of choice. It was actually pretty darn good. Not fantastic as it could be, but pretty good. Worth making again with added spices to the crust to jazz it up a bit. And I’m working on a Paleo pizza crust recipe… soon!

What’s on your pizza?

How do you eat? Are you what you eat or how you eat?? Or are you just you… eating well? 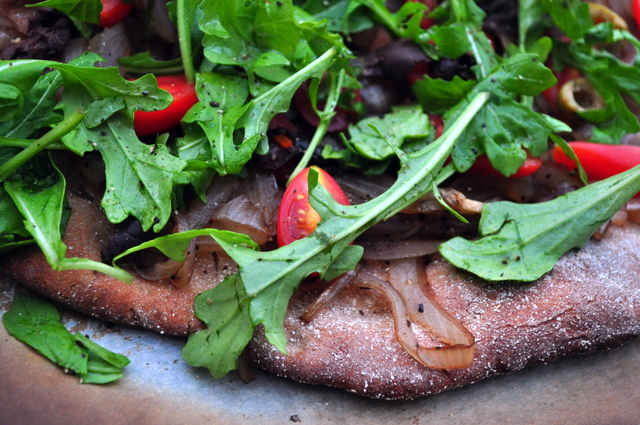 Author: Lori
Filed Under: food
Tags: dinner, food, Recipe, salad, vegan
Vanilla Almond Cupcakuffins (or cupcake-muffins!). And What’s The Difference Between a Muffin and a Cupcake?
Eating Well Is A Tough Job, But Somebody’s Gotta Do It. Part 1